What are stars in the sky?

On Earth, we perceive it as light and heat, it marks our calendar and determines our schedules. The closest star to us and on which we depend is our sun. But our beloved star king is nothing extraordinary.

In fact, he’s a pretty mediocre star, there are a hundred billion in our galaxy and they are perfect machines that never rest.

Let’s get to know a little more closely what stars are and how they work.

Stars are massive bodies that emit energy. They are throughout the universe and makeup clusters and galaxies.

In fact, there are many more stars than there are grains of sand on all the beaches on Earth: the approximate number is three hundred thousand trillion.

Around it, other bodies orbit. Sometimes they are planets, like ours. But so far, none of the five thousand observed exoplanets has found life or the possibility of hosting it.

Although they do not feed life forms or civilizations, the stars do not stop working.

They burn each atom of their fuel second by second until it runs out and the star dies.

In fact, stars are made of material that is far removed from our everyday experience.

If I ask you how many states of matter you think there are, you will probably tell me three:- solid, liquid, and gas. The truth is that there are about eight throughout the universe and one of them is plasma.

If in a solid the atoms are arranged in an orderly manner, as in Lego constructions, in the plasma the atoms are scattered, as if we had a soup of atoms. This is more or less the matter that makes up stars.

The machinery of the stars

The process that takes place in stars is, in fact, something that we would love to be able to replicate here on Earth: nuclear fusion.

Currently, the nuclear reactors that we build here on Earth work by fission, which is the splitting of the nuclei of atoms. Well, fusion is the reverse process. The stars fuse in their interior atoms and hydrogen atoms, giving rise to helium. The result of each fusion is an explosion so large that it produces enormous amounts of energy in the form of light and heat.

To carry out the merger, the stars need to be at extremely high temperatures, which we cannot even imagine: tens of millions of degrees. 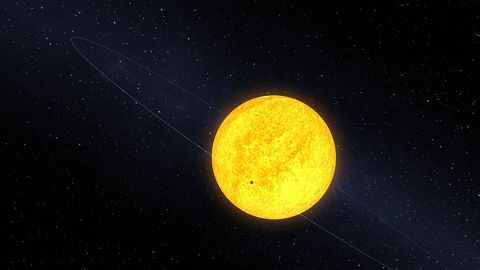 As you can imagine, stars are also very massive. So much so that its gravity is high enough to keep several planets in orbit and other types of unsuspecting bodies that pass close to it, such as comets.

In the case of our Sun, and as you probably learned in school, there are nine eight planets (sorry, Pluto) and two asteroid belts trapped in its orbit, which in turn benefit from its energy and prosper, as happens to the earth.

But other systems are not as harmonious as ours. Most of the exoplanets that we have observed are gaseous and are very close to their parent star, so close that they are sometimes burned and absorbed by it without remedy. 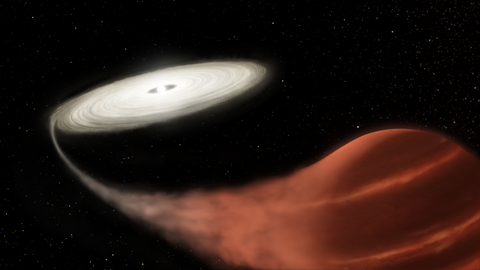 Other times there is not a single sun in the center of the system, but there are two. In fact, binary systems are quite common in nature. In these cases, it is also common for one star to ‘cannibalize’ the other.

In terms of sizes, stars also have a wide variety. They can be incredibly dense but only a few kilometers across; or else their radius may measure several thousand times the radius of our own sun.

The death of the stars

But nothing lasts forever, not even the stars. When your fuel runs out, it’s the beginning of the end.

When the star has no more hydrogen left, it will start fusing helium atoms. That is when it will begin to increase in size until its outer layers are torn off.

At this time, the dying star will emit its last breath in several possible ways, depending on its mass. If it is a medium or small star, it will eventually become a white dwarf. These are the remnants of stars after death, something like stellar corpses.

Take for example our sun. Scientists today believe that our star is in the middle of its life, about five billion years. That means it has another 5,000 left, and then it will turn into something else: probably a brown dwarf.

An ordinary star like ours will almost certainly not produce a supernova explosion. But during his last times, our beloved sun will be terrifying.

It will grow so large as a red giant that it may even swallow the planets of the inner solar system, including Earth itself. This will be the end of all known life if there is any of it left then.

But back to the death of the stars.

If the dying star is massive enough, it could explode as a supernova, a burst of extremely high energies. Other times, the stellar remnant may be a new type of star, such as a neutron star. These are slightly more complex and extraordinarily dense stars, so much so that a single teaspoon of this star would weigh hundreds of millions of tons. It can also happen that the star collapses so much in on itself as to form a black hole.

In many cases, when a star dies it leaves behind a stellar nebula. Fundamental chemical elements (in fact, for life) such as hydrogen, helium, phosphorus, sulfur, iron, silicon, carbon, nitrogen, and oxygen will have been formed in the explosion residues.

And, finally, the fact that will make your brain explode: the result of these stellar nebulae, millions of years later, new stars can be formed by gravitational attraction and, perhaps, star systems with planets in their orbit. This is how new stars are born, from the remains of a previous companion.

In fact, poetically, the elements that makeup you, your dog, all your loved ones – and everything that has existed and will exist on Earth – are formed from the remains of an ancient star that died.

That’s why Carl Sagan said that we are all ‘stardust’.

Science is a Boon or Curse